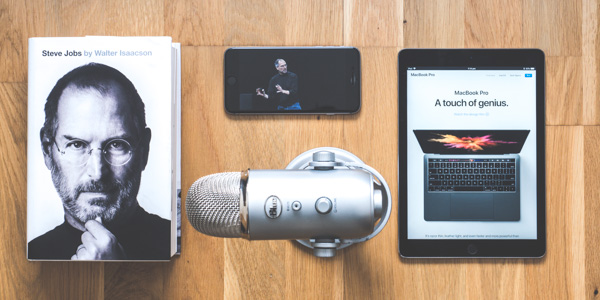 Here are some of Steve Jobs' most famous quotations. I've editorialised each of these to explain what I think it means in the context of user experience. At times, I might be reading too much into his words, but that's one of the benefits of a good quotation: we can use it to inspire us.

In this quotation, Steve Jobs is discussing the importance of focusing on users rather than technology: a central theme in user experience. It's the first lesson in UX 101: know thy user. Good designs are based upon an detailed understanding of users, the tasks they want to carry out and the environment in which the tasks take place. There's a simple reason for this: understanding users helps you build empathy for the people you are designing for. So the critical first step in development is to understand your users and what they want to do with the technology. Jobs doesn't explain how to achieve this understanding, but in my experience it's arrived at by directly observing your users' behaviour in context.


'Design is a funny word. Some people think design means how it looks. But of course, if you dig deeper, it's really how it works. The design of the Mac wasn't what it looked like, although that was part of it. Primarily, it was how it worked. To design something really well, you have to get it. You have to really grok'what it's all about. It takes a passionate commitment to really thoroughly understand something, chew it up, not just quickly swallow it. Most people don't take the time to do that.' Steve Jobs

The idea that design is like a new suit of clothes a superficial gloss is a common misconception amongst non-designers. Good design goes deeper than this, as Jobs points out in this quotation. It's true that some genius designers perhaps Jobs was amongst them can come up with this deep understanding from their own experience. But for the rest of us mere mortals, the way to 'really grok what it's all about' is to involve users throughout design and development. This is because the secret sauce in UX is user involvement: the more user involvement throughout the process, the more effective your final design will be. Exposing the development team to users gives the team an opportunity to peel away the successive layers of the onion and achieve a deeper understanding of user needs. In practice, you arrive at this deep understanding by carrying out field studies, by showing users early design concepts and by usability testing prototypes.


'Pointing is a metaphor we all know. We've done a lot of studies and tests on that, and it's much faster to do all kinds of functions, such as cutting and pasting, with a mouse, so it's not only easier to use but more efficient.' Steve Jobs

One reason I like this quotation is that it lends the lie to the idea that Apple doesn't do user research. It's true that Apple don't appear to do market research, like focus groups, but that's because market research is about finding customers for your products. Steve Jobs went beyond marketing to find products for his customers. In this quotation, he makes it clear that good design is driven and refined by user-centred evaluation. Early in the development process, intended users should actually use simulations and prototypes to carry out real tasks, and their performance and reactions should be observed, recorded and analysed. This quotation also makes it clear that you can't wait until the end of a project to see if you've met user requirements. That's the waterfall way. If you work on a project that does user acceptance testing at the end of design and calls it usability testing, you're doing it wrong. You can't just test at the end of design.


'Sometimes when you innovate, you make mistakes. It is best to admit them quickly, and get on with improving your other innovations.' Steve Jobs

Steve Jobs has been described as someone with a deep hunger for learning. This includes learning from one's mistakes as he makes clear in this article. The way this manifests itself in user experience is with an iterative approach to design. When problems are found in user testing (as they will be) they must be fixed. There must be a cycle of design, test and measure, and redesign, repeated until your usability objectives are met. It certainly helps if you use an agile development methodology but agile isn't sufficient. With agile, you iterate but you don't ideate. The concept of iteration in user experience is different. In user experience, iteration means coming up with a variety of different possible solutions. You start with a first idea, then put it to one side and come up with another idea and another, and another. It's not about taking that first idea and turning it into the best possible version but about first fully exploring the design space.


'Our DNA is as a consumer company for that individual customer who's voting thumbs up or thumbs down. That's who we think about. And we think that our job is to take responsibility for the complete user experience. And if it's not up to par, it's our fault, plain and simply.' Steve Jobs

This quotation makes it clear that you need to consider everything that affects the user experience, such as user support, the out-of-box experience and even re-engineering your company to better serve the user need. As systems and organisations become larger and more complex, there's a tendency to treat design as something that happens in a silo. This makes it easy for people in the organisation to ignore obvious issues because it's not their problem: it's the fault of engineering, or development, or management. But design is a team sport. The most effective development teams appreciate that they need to address the entire user experience and this is about more than making a system easy to use.


'Ultimately, it comes down to taste. It comes down to trying to expose yourself to the best things that humans have done and then try to bring those things into what you're doing. Picasso had a saying: good artists copy, great artists steal. And we have always been shameless about stealing great ideas, and I think part of what made the Macintosh great was that the people working on it were musicians and poets and artists and zoologists and historians who also happened to be the best computer scientists in the world.' Steve Jobs

When I look around many of the development teams I work with, the people I see are like clones of each other. Not just in terms of their cultural background (although it's true that most of them are male, young and white). But also in terms of their technical background: development teams predominantly comprise people who write code. It's true that this isn't helped by Scrum which recognises just three roles: Product Owner, Scrum Master and Development Team. But that doesn't mean everyone on the development team needs to be a coder. The best development teams include multidisciplinary skills and perspectives, such as user researchers, interaction designers, content designers and front-end developers. Such teams are small, project based, co-located, and multidisciplinary.

This article is tagged quotations.