The problem we need to solve can be explained by considering Figure 1 where we have prototyped a very simple usability questionnaire using Axure 7.

To prototype this in Axure 7 we can do the following:

Label all of the radio buttons and add a rectangle shape for calculating the total, as illustrated in Figure 2. 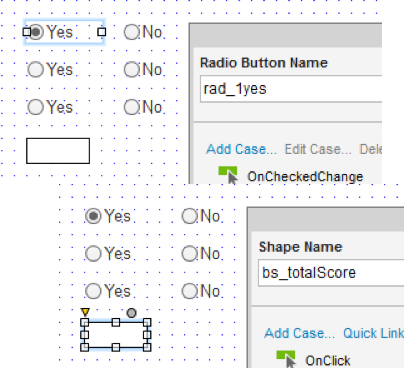 Assign each pair of radio buttons to a radio group to take care of the exclusivity of each answer, as illustrated in Figure 3. 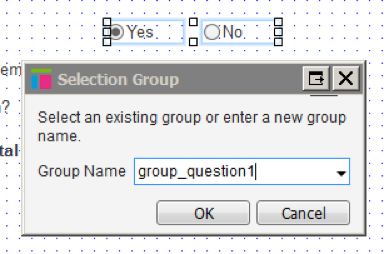 Add a case to the OnClick event of the first radio button, named setTotalScore in this example, that has an action to calculate the total score, based on the status of the radio buttons, and place this value into a global variable called gVar_totalScore. In this example, I’m doing this via three local variables (lVar question1, lVar_question2 and lVar question3) that are mapped to the is selected of status of the three ‘Yes’ radio buttons. This means that when the radio buttons are in the selected state the value of each local variable will equal 1. The values for each local variable are then added together and placed in the variable called gVar_totalScore. This is illustrated in Figures 4 and 5. 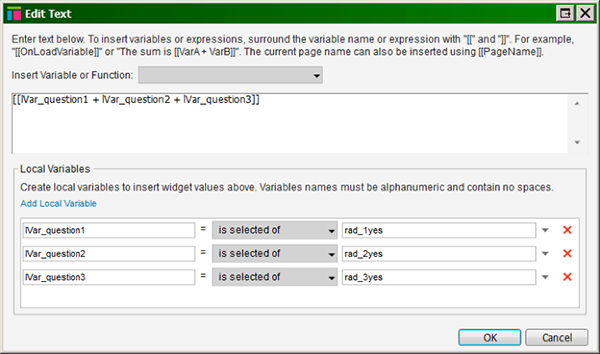 Add an action to this setTotalScore case that places the value of the variable gVar_totalScore into the rectangle shape called bs totalScore, as illustrated in Figure 6.

And now the problem…

This example will work just fine, but the architecture of this Axure prototype has a significant problem that could cost us a lot of time later on. The problem comes if we want to add a fourth question and an associated pair of radio buttons, as illustrated in Figure 8.

As well as adding cases to the new radio buttons, we also need to update every case on every one of the existing six radio buttons, so that the total score is now calculated on the basis of all four questions. This is quite a lengthy and tedious task, and in real prototyping scenarios, we may have to update lots of cases this way, and remember — a key feature of prototyping is speed.

When there are many actions and conditions to be updated within each case, we could save some time by updating just one case, deleting any old cases, then copying and pasting the updated case as required. However, this is still quite lengthy and tedious. Its repetitive nature also means that it is error-prone, for example it is easy to forget to update one or more widgets if we are editing lots of them. In turn, finding bugs introduced by such errors can be quite difficult to track down, as we may be convinced that all the widgets have been correctly updated.

And now the solution…

Fortunately, there is a solution to this problem. Consider a new version of our Axure prototype illustrated in Figure 9. This includes a small dynamic panel, which has one empty state and, in this example, is labelled calculator. The OnMove event of this panel has a case that contains all of the actions necessary to calculate and set the total score: that is, the same cases that were present on each radio button in the previous version of our prototype.

As illustrated in Figure 10, each of the radio buttons in this version has a case with a single action on its OnClick event — Move calculator by (0,0). This does not actually move the panel anywhere (because the move values are 0,0) and, indeed, we have no interest in actually moving this panel in this prototype. Rather, the key here is that this action triggers the calculator panel’s OnMove event, which in turn performs the cases we need to calculate and set the total score. 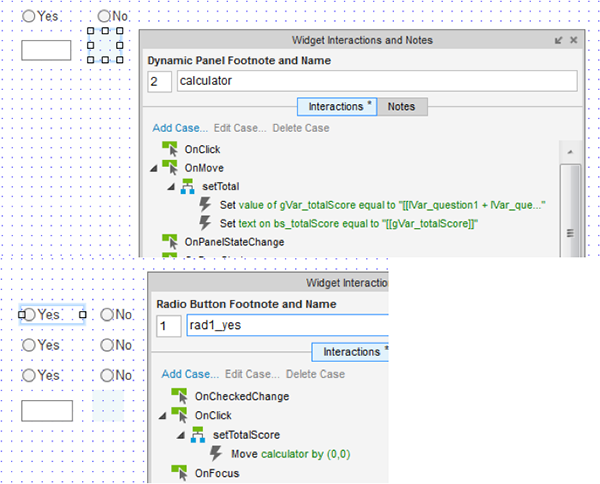 Discussion, Takeaways and Next Steps

Of course, the time saving and error prevention benefits of this architecture increase along with the number of times that similar cases would otherwise need to be replicated across the prototype, but the architecture has another, less obvious, but key advantage. Keeping track of what interactions each widget/event is performing in a prototype can ultimately become the limiting factor in how complex an Axure prototype an individual can produce. This architecture, whereby we keep more complex cases in one place, or put another way, "modularize" the interactive aspects of the prototype, makes the process of managing complex interactivity easier and more scalable. Therefore, this increases the potential complexity of the prototype.

The ultimate progression of this architecture is to set global variables prior to triggering a dynamic panel’s OnMove event, such that the panel then uses the value in the variables to determine (through the use of conditions) which case(s) to execute, and how this execution should be performed, in particular contexts. Indeed, some Axure experts, including myself, have pushed this architecture to the point whereby, for very complex prototyping, we manage most, or even all, of the interactivity using a single control panel and a suitable set of variables for managing the behaviour of this panel. In my experience, this makes it easier to keep the ‘interaction model’ in mind and identify/correct any bugs. Indeed, an example of this can be found in the widget called menuPanDragSwipeRepeaterItems (H) in Ax-Stream’s Drag, Swipes and Spins widget library (which is a free download), and Figure 11 contains a snap shot of this that demonstrates the basic concept. 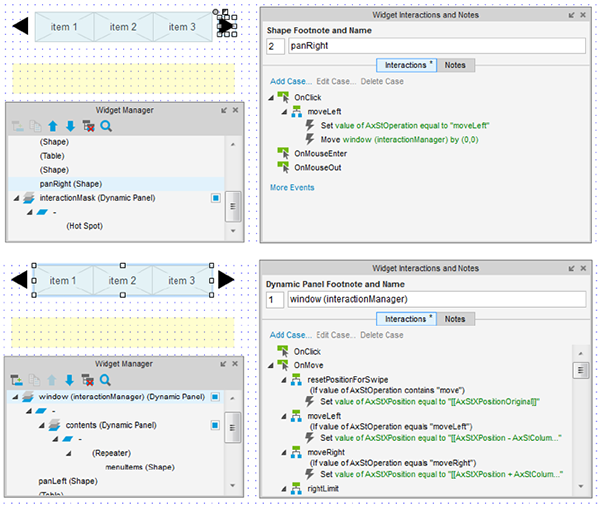 The use of such architectures can be extended in Axure prototyping whereby we set up a bunch of such ‘control’ dynamic panels on a page that act like a subroutine library that we can simply call upon from any widget or event to execute the cases we need.

Of course, as with all Axure functionality, we can place these control panels into masters if we want to reuse them across pages. Similarly, we can place them within custom widgets so that (complex) cases can be reused across different projects via widget libraries. I also hope that such libraries will eventually be produced for distribution across the Axure community so that Axure prototyping speed can be increased in general — just as code subroutines and objects that solve common programing problems are freely available to developers (for a wide variety of development environments).

Clearly, these more sophisticated progressions will be best suited to those with a more technical background, who are capable of complex Axure prototyping. However, the basic technique of using the OnMove event on a dynamic panel to reduce redundancy in a prototype’s interaction model is not particularly difficult to understand at its most basic level, and I hope it will be useful to the wider Axure community.

This article is an extract from "Reusing Cases Across Different Widgets and Events" from Prototyping Essentials with Axure, edited by Ezra Schwartz and Elizabeth Srail (2014).

Dr. Ritch Macefield (@Ax_Stream on Twitter) holds a BA in Creative Design, an MSc in IT/Computing and a PhD in HCI. He is an acknowledged expert in Axure having led Axure projects for clients like Thomson-Reuters, Dell computers and Vodafone. He was a panel speaker at Axure World 2012, contributed to the book “Axure RP 6 Prototyping Essentials” and founded the Axure RP Pro LinkedIn Group.

This article is tagged axure, prototyping.

Dr. Ritch Macefield (@Ax_Stream on Twitter) holds a BA in Creative Design, an MSc in IT/Computing and a PhD in HCI. He is an acknowledged expert in Axure having led Axure projects for clients like Thomson-Reuters, Dell computers and Vodafone. He was a panel speaker at Axure World 2012, contributed to the book “Axure RP 6 Prototyping Essentials” and founded the Axure RP Pro LinkedIn Group.